“I’ll have what she’s having” may be the funniest line in the history of the movies. It’s what an elderly woman (Estelle Reiner) says, deadpan, to her waitress while watching a young woman (Meg Ryan) fake an orgasm at a nearby table where she’s dining with her former boyfriend (Billy Crystal) in Rob Reiner’s classic 1989 film, “When Harry Met Sally.”

In real life, however, those same five words,“I’ll have what she’s having,” can save some adults from public humiliation.

Let me explain: Recently I posted about a young woman who teaches First Grade on Martha’s Vineyard (MA) and moonlights three or four nights a week as a waitress.  The menu at her restaurant was all words, no pictures.

Here are three examples from the menu:

By contrast, imagine you are eating at Burger King, MacDonald’s, a fast food place at an Interstate rest stop, or Denny’s.  At these places, photographs rule!  Here’s a sample from Denny’s: 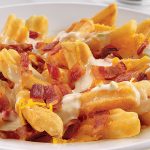 A few words accompany each photo, plus the price.

If you’ve ever wondered why fast food restaurants and food courts at highway rest stops feature photos of all their food, well, it’s not simply to stimulate taste buds; it’s an acknowledgement that many of their customers are not readers. Those laminated full-color menus are an expensive accommodation, and they have to be reprinted every time prices go up or the menu changes.

That Vineyard restaurant–and all the other restaurants whose menus eschew pictures– are pretty much off limits for more than half of adult Americans, the roughly 141 million men and women who read below a 6th grade level, including a large number who are functionally illiterate.

More than 35 years ago producer Mike Joseloff and I traveled to Iowa to report on adult illiteracy for the NewsHour.  We chose Iowa, as I recall, because it had one of the highest-ranked public education systems.  There we spent time with a local businessman and his wife.  The man had his own successful plumbing business, but he could not read!  His wife handled all the correspondence and record-keeping, allowing him to live a lie, going through his days posing as a reader.

He had survived, he told us, by using his wits. He would carry a newspaper and pretend to read it while drinking his coffee, and he kept up with the news on local radio and TV, in case his customers wanted to talk about current events.

As for dining out, he always went to restaurants with picture menus: Denny’s, Howard Johnson’s, MacDonald’s and so forth.

If he and his wife went out to dinner with friends and somehow ended up at a restaurant with a ‘words only’ menu, he said he would pretend to read his menu while listening carefully to what everyone else was ordering.  He made sure that he would order last, and then he’d say to the waiter, “I’ll have what she’s having.”

When we met him, he had decided he’d had enough of living that lie. He had just enrolled in an adult literacy class, in part because he wanted to be able to read to his young children.

Perhaps most non-readers don’t have the courage or the opportunity to learn to read as adults.  That man was doubly fortunate: a loving and supportive wife and the courage to ‘come out’ as illiterate.  It seems likely that the majority of non-reading adults lead lives of deception, fewer opportunities, or narrower horizons–the direct result of our failure to teach them to read with confidence and comprehension when they were young children.

Mike and I did that story for the NewsHour a few years before “When Harry Met Sally.” Sadly, we probably could do it again, in Iowa or in any other state because American schools continue to do a poor job of teaching reading.

Let me leave you with a conundrum: FIRST, We know that reading is the fundamental building block of education, AND we know that competent readers are more likely to finish college (and beyond), AND we know that educated citizens earn more money, live in nicer places, have access to better health care, and live longer, healthier lives.

SECOND, we know how to teach reading effectively to virtually all children.

THIRD, despite our awareness of reading’s importance and despite our knowing how to teach reading effectively, we do not provide the necessary resources to teach all poor children and children of color to read confidently and with understanding.

WHY? Is the system set up to maintain the status quo, even though education is supposed to be a ladder up? Is it inherently racist and classist?

What do you think?