I hope to convince you that students, not teachers or school administrators, should make the rules governing classroom behavior, and so, if you aren’t a teacher or if you aren’t concerned about public education, you can skip this.

The notion of letting students make the rules governing classroom behavior will be a heavy lift. Why?  Because public schools are fundamentally and deliberately anti-democratic. They are places where young people are told where to sit, when to talk, when to eat, when to play, what to read and think about, and more.

Why are our schools anti-democratic? Perhaps to make it easier for the adults.  Perhaps because long ago we adopted the Prussian education model: lectures to children grouped by age. Or perhaps because we adults haven’t had much experience with democracy in our own lives.

But what better place to start practicing democracy than in classrooms and in schools, where kids of varying backgrounds are supposed to learn how to live and learn together.

What I am arguing for here is rare.  In 41 years of reporting, I visited thousands of elementary school classrooms, and virtually every one of them displayed–usually near the door–a poster listing the rules for student behavior.

These were store-bought, glossy, laminated posters.  No editing possible, and no thought required. Just follow orders!  Here’s an example: 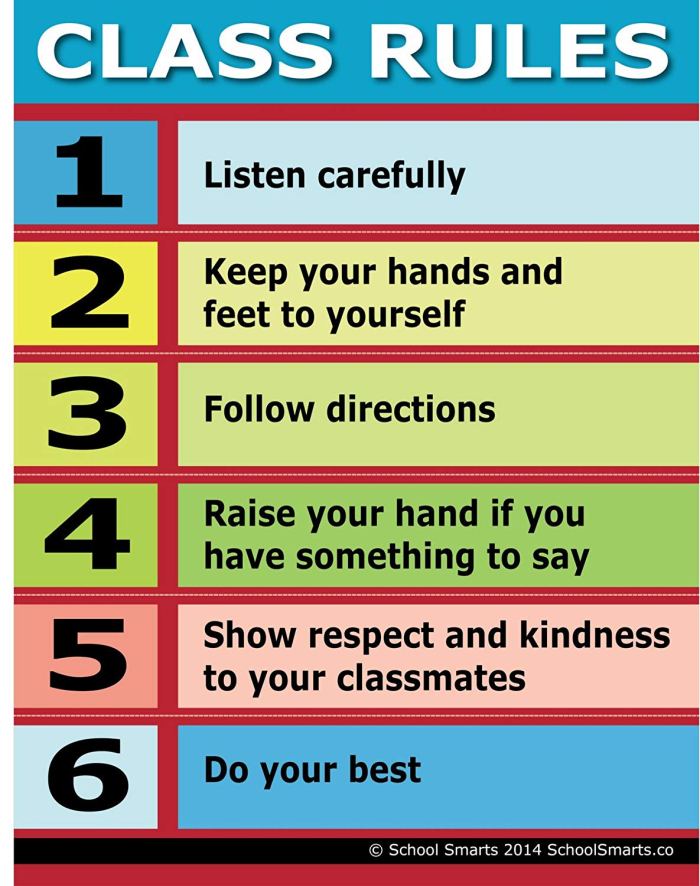 I can imagine teachers reading the rules aloud to the children on the first day of class and only referring to them whenever things got loud or rowdy.

“Now, children, remember Rule 4.  No calling out unless I call on you.”

I am partial to classrooms where the children and their teacher spent some time at the beginning of the year deciding what the rules should be and figuring out what sort of classroom they want to spend their year in. I watched that process more than a few times. First, teachers asked their students to engage.

Children, let’s make some rules for our classroom.  What do you think is important?

Some teachers led the conversation in certain directions:

What if someone knows the answer to a question?  Should they just yell it out, or should they raise their hand and wait to be called on?

Or: If one of you has to use the bathroom, should you just get up and walk out of class? Or should we have a signal?  And what sort of signal should we use?

It should not surprise you to learn that the students invariably came up with reasonable rules much like those on the laminated posters: Listen, Be Respectful, Raise Your Hand, Be Kind, and so forth.  But there’s a difference, because these were their rules, and teachers and principals told me that, when students create the rules, they own them and are therefore more likely to adhere to them.

Not just rule-making. I’d give students more say in what they study as well, because I believe that a good education system is–insofar as it is possible–both personalized and child-centric.  Giving students–at all levels–more ‘agency’ over their education means figuring out what each student is interested in and then using those interests to see that they learn to read with comprehension, work with numbers, speak in public, and work well with others.

However, students shouldn’t get to make all the decisions about what they’re studying.  After all, a central purpose of school is the transmission of knowledge, and so the basics are also part of the deal.  Young children need to learn spelling rules (“I before E, except after C”), the multiplication tables, how to divide and carry, and other basics. They need to know that letters have sounds associated with them (i.e., Phonics and Phonemic Awareness).  Someone has to teach them that, if you put an E at the end of words like ‘ton,’ the O sound changes from ‘short’ to ‘long.’

Giving students power over their learning will, eventually, make teaching easier.  I was a high school English teacher many years ago, assigned students in the lower academic tracks. They were supposed to write a few papers (we called them ‘themes’) during the year, and I probably gave them assignments based on whatever play or novel we were reading.  So I ended up reading 125 papers about ‘Macbeth,’  ‘All Quiet on the Western Front,’ or Shirley Jackson’s short story, ‘The Lottery.’   That takes a toll on the teacher!

(Side note: NO English teacher should be responsible for 125 students! That’s an impossible task that forces teachers to triage.)

If I were teaching high school English today, I would ask each student to identify three or four things they were curious about. Then I would spend a few minutes with each student, getting that list down to one topic.  I’d ask for a 1-page ‘memo’ of their thoughts about how they would approach the topic, followed a week or so later by an outline.

When I discovered that some students shared an interest in the same general topic, I would connect them and urge them to share their pursuit of knowledge.

Because I would be looking at drafts of their work, the chances of them downloading someone else’s work from the internet would be minimized.

I would also ask students to create a webpage where essays could be shared with students and the community at large.  Pride of publication is a great motivator!

Math teachers could invite students to create word problems that reflect their own interests.  A youngster interested in farming oysters might create problems that provide data about the cost of ‘seed,’ the rate of loss, the time involved in transferring the ‘seed’ as it begins to mature, the labor costs involved in harvesting. What’s the rate of return on investment if…..?

The draconian opposite–Giving children no say in the rule-making process–can be found in so-called “No Excuses” schools.  The poster child is Eva Moskowitz and her Success Academies, a chain of charter schools in New York City.  A few years ago on my blog I published Success Academies’ draconian list of offenses that can lead to suspension, about 65 of them in all.   Here are three that can get a child as young as five a suspension that can last as long as five days: “Slouching/failing to be in ‘Ready to Succeed’ position” more than once,  “Getting out of one’s seat without permission at any point during the school day,” and “Making noise in the hallways, in the auditorium, or any general building space without permission.”   Her code includes a catch-all, vague offense that all of us are guilty of at times, “Being off-task.”   You can find the entire list here.

(Another side note: the federal penitentiary I taught in had fewer rules.)

Preparing young people for life in a functioning democracy won’t be easy because it means that adults have to change their behavior.  Their challenge is to ask and answer a different question about every young person–How Is This Student Smart?  Humans are curious by nature, and every child has interests and abilities that can be built on, and so teachers might consider asking questions, instead of simply giving assignments:

What would make this material appealing to you?

What would persuade you to invest your energies in this subject?

I also believe young people should be deeply involved in figuring out how their efforts will be measured.  It makes no sense to wait for end-of-the-year bubble test results or for teachers to arbitrarily say ‘This passes” or “This doesn’t.”  Teachers and students should assess progress frequently, take a clear-headed look at the results, and adapt accordingly.

Education is much more than knowledge transmission. Much of what goes on is the development and creation of the individual.  What Jacques Barzun called “Building a Self” involves discovery and trial-and-error, and that journey becomes much more interesting when kids are creating knowledge, not just giving back the right answers in order to get good grades.

The goal of education, wherever it’s occurring, is not correct answers. The end game is life-long curiosity.

One thought on “LETS STUDENTS MAKE THE RULES”