So, Mission accomplished.  But, wait, here’s one more photo I want you to see: 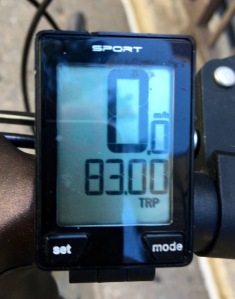 I biked an extra six miles because I got carried away by the beautiful day and a very flat course with a tail wind.  My birthday is tomorrow, but I moved the ride up two days based on weather reports. I began at 7AM and had the old ‘rails to trails’ path pretty much to myself.  Meaning few other humans.  Lots of wildlife: I passed a mother goose and her eight or nine goslings; a yearling deer who stayed motionless on the bike path as I glided by, maybe 3 feet from it; a woodchuck; swans; innumerable chipmunks and rabbits; and this majestic egret. 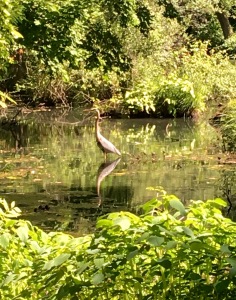 One swan is barely visible from this old railroad bridge

Perhaps 6 miles of the entire 83 mile ride are NOT bucolic, wooded, and peaceful;  occasionally there’s evidence of the old railroad system. 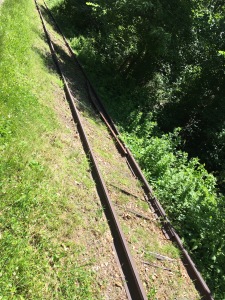 Here’s what really matters: Based on what folks have reported to me, readers have pledged or donated more than $85,000 to various organizations and political candidates.  Planned Parenthood seems to be a favorite, along with the Network for Public Education.  Joan and I donated to Planned Parenthood, NPE, and Jesse Colvin’s campaign for the Congressional seat in the First District of Maryland (take a look if you have time.)  Some of you reported giving to two or three organizations.  One large donation to Tougaloo College, an HBCU, skewed the results, and I am certain that the donor, a writer friend, would have made his gift anyway, but he said he was linking it to my bike ride and urged me to include it in the total, which I have done.

Now, to get into the weeds about my ride: I averaged 12.7 miles per hour, a decent pace for someone about to enter his 78th year of life, I think. 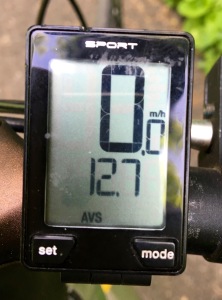 I started riding at 7AM and finished seven and a half hours later, but that included two snack breaks, lunch, and a trip to the bike store in Yorkville Heights to replace my sunglasses (which broke, the only negative).  My total biking time was 6 hours, 28 minutes, and 23 seconds, according to my odometer.

I barely made it to sunset before crashing; I slept from 9PM until 6:30 this morning.

Thanks for indulging me, for reading, and for donating to a worthy organization (or two or three).  I feel blessed for being alive and healthy, but now let’s back to the serious business of rescuing public education and our children from two distinctly different groups, Betsy DeVos and her supporters and the test-obsessed corporate reformers.