As always, remember that John’s book The Influence of Teachers is for sale at Amazon.

At Harvard recently a young graduate student asked me a tough question:

Mr. Merrow, you have been interviewing educators for 35 years. How do you know when an educator is sincere and can be trusted?

It’s a great question, but before I tell you how I answered her, let me admit that, once I got back to New York, I queried other education reporters on the subject. Is there language — jargon — that makes you suspicious of educators, I asked?

The flood of responses surprised me. It seems that a lot of reporters have had it up to here with educational jargon. Their (non) favorites include phrases like: ‘at risk,’ ‘scaffolding,’ ‘value-added,’ ‘best practices,’ ‘state of the art,’ ‘laser-like focus,’ and ‘raising the bar.’

For about half a dozen reporters the absolute nails-on-the-blackboard term is ‘stakeholders.’

“Aligned instruction with buy-in by highly qualified teachers for authentic inquiry-based learning and student engagement in professional learning communities will produce 21st Century skills in our youngsters.” (And I’ll bet some educator somewhere has actually said that!)

(But not in my new book, The Influence of Teachers.  I did my best to make it a jargon-free zone and will refund your purchase price if you can find examples of my — non-ironic — use of ‘educationese.’)

Educators apparently adore alliteration: ‘Scaffolding for success,’ ‘ramp up for rigor and readiness,’ ‘data-driven,’ ‘drilling down,’ ‘authentic assessment,’ ‘teaching to the test,’ and ‘rigorous research.’

Reporter Jackie Borchardt of the Casper Star-Tribune made a school board bingo card last year that included ‘literacy,’ ‘goal team,’ ‘rigor,’ ‘pathways,’ ‘research-based,’ ‘engaged,’ ‘high-access,’ ‘what’s best for kids,’ ‘cohort,’ ‘strategic plan,’ ‘and ‘21st century education. She didn’t say whether she called out “Bingo” during a School Board meeting! 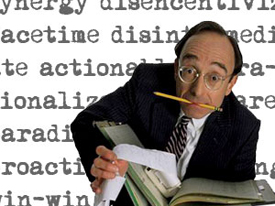 Does jargon disguise vacuity? Anne Lewis, a veteran reporter, offered this analysis: “I have come to the conclusion that it exists because of a professional lack of esteem. Other professions requiring college degrees have a specific language — medicine, the sciences, engineering, law. But educators only have plain English, so they change it into a ‘professional’ language that sounds fancy and inaccessible when it ought to be the most accessible profession of all.”

Do some educators obfuscate because they think it makes them sound more professional? Are some educators so deep in the weeds of their profession that they have forgotten how to communicate with ordinary folks?

And are some being duplicitous, saying, ‘We know what works’ when in fact they do not?

I suspect it’s “Yes” to all of the above.

So how did I answer that young woman?

I told her that two terms make me hyper-vigilant: rigorous and ready to learn. ‘Ready to Learn’ tells me one of two things: either the educator hasn’t thought about the difference between being ‘ready to learn’ and being “ready for school” OR she actually believes they mean the same thing. If the latter, that’s remarkable arrogance. If the former, let’s hope the leader can be taught the difference.

I hate it when educators talk about the need for a ‘rigorous curriculum’ because that tells me they haven’t thought much about the meaning of the adjective (harsh and unyielding). Perhaps they think it makes them sound tough, as if that were a good thing, but I associate rigor with death (‘rigor mortis’). Who needs that in our classrooms? Why not say ‘challenging’ instead?

But what I listen for are clues about beliefs. When an educator looks at a child, I want to know if he wonders, “How intelligent is this kid?” — or is he thinking “How is this child intelligent?”

If the former, then the educator is operating from a medical model, with himself as the doctor and provider of cures. I don’t like that philosophy. If the latter, he is working from a health model and is ready to build on the child’s strengths.

I advised the young woman that one cannot simply ask educators which way they look at the world, because they will spit back the politically correct response. Instead, I said, watch and listen carefully. Cut through — or even ignore — the jargon, which at the end of the day is a nuisance and a distraction. It’s the core beliefs that matter.

25 thoughts on “The joys of jargon”