I had two jaw dropping moments in just one day, November 9, 2010. The first involved Black boys in and out of school; the second, Joel Klein. 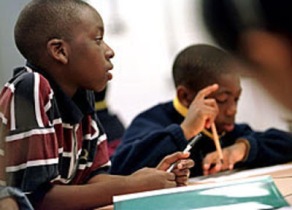 “Jaw-Dropping Data” and “National Catastrophe” were two of the attention-getting phrases in the press release from the Council of the Great City Schools, phrases I assumed were hyperbole designed to catch the reader’s eye.

Wrong! The data, from the report titled A Call for Change: The Social and Educational Factors Contributing to the Outcomes of Black Males in Urban Schools (PDF), are jaw dropping, and we do have a national catastrophe.

Let’s start with educational attainment. Here are just a few of the numbers:

But the crisis doesn’t begin in school, the report notes.

And the unfortunate outcomes are all too predictable:

What’s to be done about this national catastrophe? The report (PDF) makes 11 recommendations. To this reader, too many of these recommendations use verbs like ‘encourage’, ‘compile,’ ‘convene,’ and ‘marshal.’ Naturally, a White House conference is at the top of the list.

I would have liked to see some very specific recommendations, such as schools exclusively for young Black boys, for example, or classes separated by gender. (Because so many of our public schools are now de facto segregated, one doesn’t have to mention race. Simply calling for gender specific schools and classes is enough to assure that all the boys will be Black, or all Hispanic, or all White. That’s where we are now, 56 years after the Brown decision.)

The French pre-school system has what it calls ‘economic priority zones (ZEP, in French), to which the government devotes more resources, not fewer. I know we’ve tried that in Kansas City, Newark and other places without much success, but I think that’s because the money was spent on buildings, or salaries, or adult needs.

Perhaps one of those national meetings the report calls for could come up with better ways to spend the additional dollars we are going to have to spend to solve this crisis.

My jaw dropped a second time when I learned of Joel Klein’s resignation as New York City Schools Chancellor. He’s labored long and hard in the nation’s largest school system and has achieved some noteworthy success, particularly the large network of small high schools established on his watch. (Ironically, my colleague John Tulenko is preparing a PBS NewsHour report on those schools right now and actually interviewed the Chancellor a few days ago.)

Unlike his protégé Michelle Rhee, Chancellor Klein is leaving on his own terms, to return to the business world he came from. He has accepted a big job with the News Corporation, Rupert Murdoch’s organization. His detractors are going to have fun with that.

What’s fascinating is Mayor Bloomberg’s choice of a successor, another successful executive from the business world, in fact from publishing (Klein came from Bertlesmann). Catherine Black ran the Hearst empire, and now she’s coming into the schools, a novice at age 66.

I’ll bet dollars to doughnuts that Mayor Bloomberg never even considered handing the reins to a traditional educator.

But Ms. Black is going to have to do what Joel Klein was not able to accomplish, and that is transform the city’s schools into 21st Century institutions, places where students learn to ask questions, not simply regurgitate answers. Is there a road map for that work? I believe there is, but I’d rather hear from you on that.

Watch Joel Klein talk about the job of NYC Schools Chancellor after his first three years on the job in 2005.

13 thoughts on “A Jaw Dropping Day”